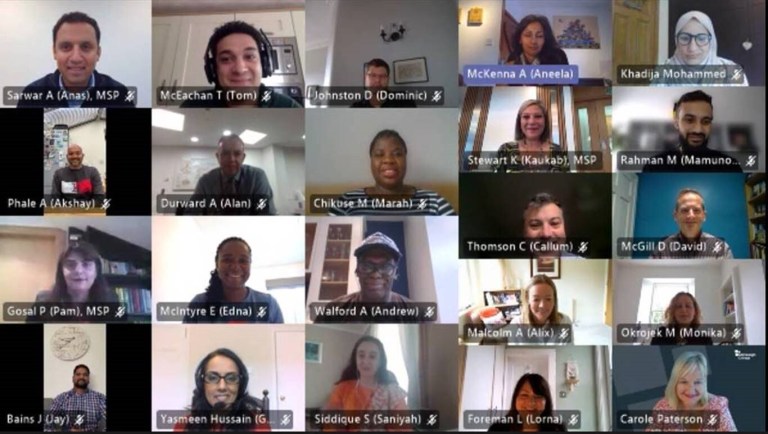 Edinburgh College has partnered with the Scottish Association of Minority Ethnic Educators (SAMEE) to deliver a bespoke training course to improve minority ethnic diversity and seniority amongst Holyrood staff as part of a new Scottish Parliament programme.

The Scottish Parliament’s ‘Emerging Leaders’ programme aims to develop existing minority ethnic talent within the organisation and seeks to attract future employees from a wider range of backgrounds.

While the diversity of MSPs increased at the 2021 Scottish Election, diversity monitoring within the Parliament found minority ethnic staff were under-represented in its staff group compared to the national population, along with an ethnicity pay gap.

The new course designed by the College’s Leadership and Management curriculum team and Khadijah Mohammed and Yasmeen Hussein of SAMEE will help develop the leadership skills of existing staff.

Twelve delegates from the Parliament will take part in four sessions from August until December, during which the fundamental concepts of leadership qualities and behaviours will be considered, recognising leadership in different professional settings and situations and how personality, values, beliefs and experiences influence leadership behaviours.

Scottish Parliament Presiding Officer Alison Johnstone MSP said: “We now have a Parliament of MSPs that better reflects the diversity of Scotland and that can only lead to better and fairer representation.

“It’s fundamentally important however that the talented staff who make the Scottish Parliament function also reflect the diversity of our country, and progress must be made on that front.

“I wholeheartedly welcome the Emerging Leaders programme and the steps being taken to improve ethnic diversity at all levels of seniority within the Scottish Parliament.”

Edinburgh College Principal Audrey Cumberford said: “We’re proud to be working alongside SAMEE to deliver this important training programme for the Scottish Parliament.

“Diversity across the nation’s leadership and workforce is vital and we are delighted to be delivering these bespoke sessions to Parliament staff through the remainder of this year.”

Find out more about the Emerging Leaders course here.