The team of mechanics provided car maintenance and pitlane support to Sir Chris and his Racing Lines team who were driving a Citroen C1 car around the famous track used to host Formula 1 and other motor races.

The team provided 24-hour support, including fixing the car during the race following a crash in which the car was rolled over and required a mammoth team effort to fix so that it could return to track.

Brian Alexander said: “It was a great experience, we got to work with Sir Chris Hoy and lots of experienced drivers across the weekend.

“The highlight of the race came after about an hour and a half when the team pulled together to get the car fixed as quickly as possible and back out on the track after it was involved in a crash. The car rolled on its roof, so it was all hands to the pump getting the car ready to go back out to finish the race.”

Robert Vass said: “Getting the car to the end of the 24 hours was a massive achievement.”

Martin Tracey added: “When we managed to get the car back on the road, the other drivers were amazed. An hour and half into a 24-hour race with a crash makes getting the car ready to race again, very difficult but we did it.”

Automotive apprentice Kyle Nisbet said: “It was a brilliant experience, we really had to work as a team and we did that well. We worked from 6am until 6am, more or less non-stop.

The Automotive team was approached to provide support given their knowledge of Citroen C1 racing, having been part of the College’s Scottish C1 Cup team since 2019.

The Scottish C1 Cup sees Edinburgh College line up three cars on the grid at Knockhill Racing Circuit in Fife, in competition with other teams from across Scotland. Kyle Nisbet is one of the College’s racing drivers. 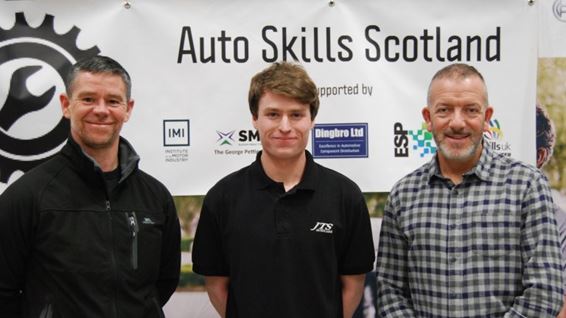 This course will allow you to develop the necessary skills and knowledge for a career in automotive engineering. Working...

This full-time course is designed for you to develop the skills and knowledge that you have gained during the Institute ...

This full-time course will develop your skills and knowledge gained during the IMI Level 1 Diploma in Vehicle Accident R...

This course will develop your skills and knowledge gained during the Level 1 Certificate in Transport Maintenance (or eq...

If you have recently finished the Level 2 Diploma in Light Vehicle Maintenance and Repair and wish to progress to the ne...