An East Lothian student has opened the door to a career in engineering following two successful years at Edinburgh College, where he has recently graduated with a HND in Electrical Engineering.

Twenty-year-old Ladislav Horvath from Musselburgh opted to study at Edinburgh College to gain the grades he needed to go on to university. And, having successfully completed his Electrical Engineering course, he has now progressed into the second year of an Electric and Electronic Engineering degree at Edinburgh Napier University. 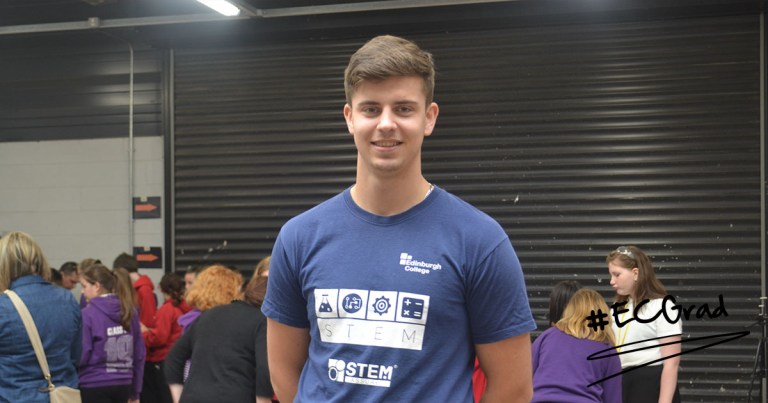 The former Musselburgh Grammar School pupil said: “College has been brilliant for me in helping me to get to a position where I can pursue a career. It feels great knowing that I have managed to complete the first part of the puzzle, now it’s on to university and see what comes after that.”

As well as walking away with his HND in hand, Ladislav was also awarded the Marston Citizenship Award at the College’s Graduation ceremony held at the McEwan Hall last week.

The award was given in recognition of Ladislav’s work as a Science, Technology, Engineering, and Mathematics (STEM) scholar during his final semester at Midlothian Campus.

Ladislav was selected to be a STEM scholar as part of a programme facilitated by the Edinburgh College Development Trust and the David Doig Foundation.

As part of the role, Ladislav supported the delivery the College’s STEM Inspiration Experience programme to P7 and S1 pupils every Thursday. He spent time interacting with pupils from across Edinburgh and the Lothians to help them through a series of activities designed to give them an insight into STEM subjects from an early age.

Working with the STEM team has opened Ladislav’s eyes to working with young people and to the possibility of teaching at some point in the future.

“I’ve really enjoyed working with the STEM team every Thursday, it’s been great to get hands-on experience of working with young people. It has also given me chance to work with all the teachers from the different schools as well as students and other lecturers from other campuses.

“I like working with young people and so this has been perfect for me as it has given me exposure to working with school pupils in different situations and I’ll be able to use the skills I have learned and developed in my future career.”

If you want to pursue a career as an electrical engineer, this course is designed for you.  Electrical and Electronic En...

The Electrical and Electronic Engineering Level 5 will give you essential knowledge of the engineering industry. You wil...

Electrical Engineering NC Level 5 is run in collaboration with ScottishPower and is designed to introduce you to electri...

You will gain a broad understanding of technical aspects and practical skills within the Electrical Installation & Engin...